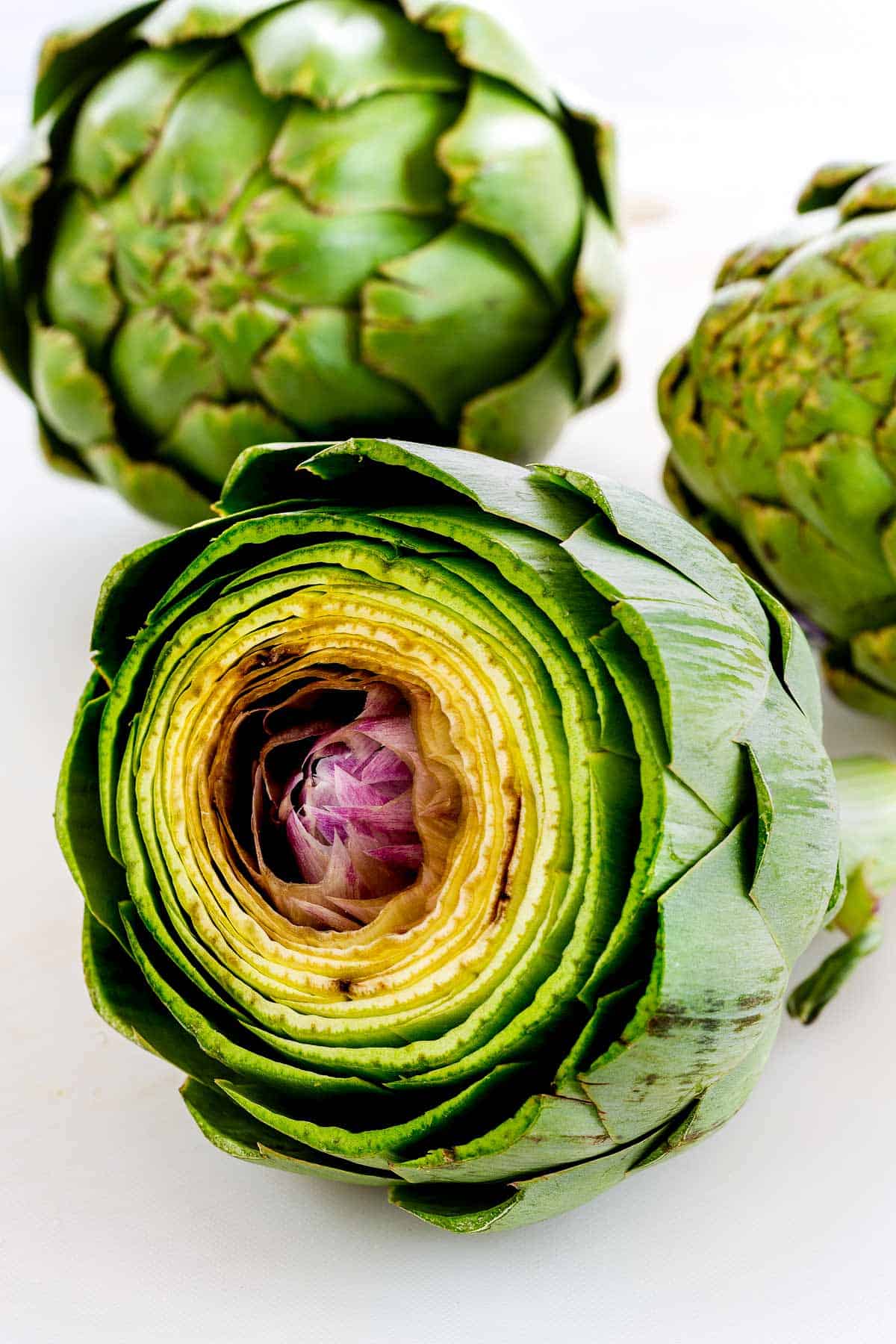 Fruit? Vegetable? Flower? What is an artichoke anyway? Let’s find out. 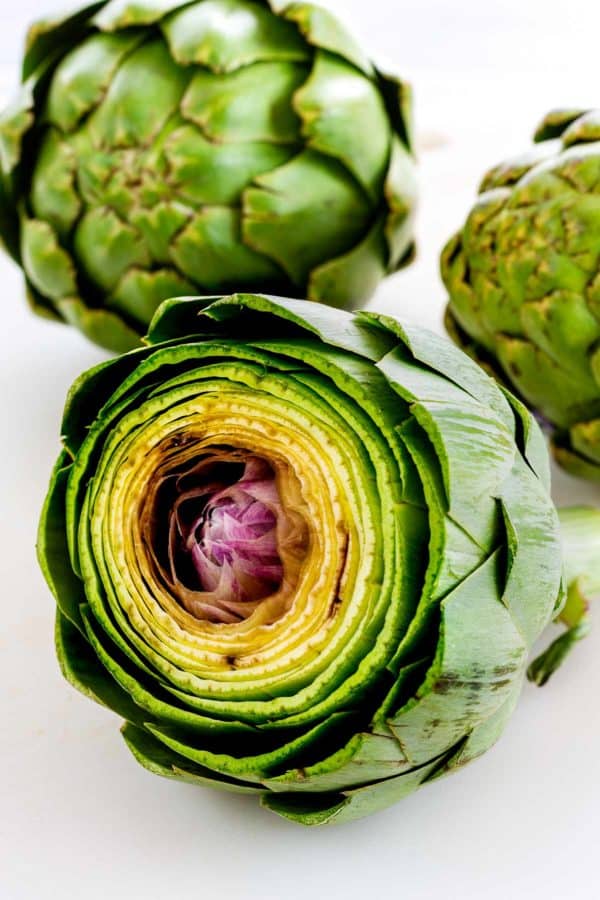 While artichokes are technically a vegetable, they’re also part of the same family as dandelions, sunflowers, and daisies. It’s a thistle plant and a sort of edible wildflower that’s harvested before the actual flower blooms. Just picture an artichoke and this actually makes a lot of sense. They’re grown in cool but sunny climates (primarily in California in the U.S. and in Spain, Italy and, France near the Mediterranean Sea).

So what about eating them? The best time to buy artichokes is in spring and summer; they’re usually in season from March through May, and sometimes longer. You might find them in grocery stores and farmer’s markets throughout the summer, and they have a mini-season in the fall as well.

The Globe artichoke is what you typically see in stores; it’s the most common. The Big Heart artichoke is also fairly common, often used for recipes that call for stuffing artichokes because they’re so large. But there are several other varieties as well.

For example, baby purple Anzio artichokes are small enough to be eaten whole. The Fiesole artichoke is also on the smaller side but maroon and fruity. Getting larger, the Sienna artichoke is more oblong but also has a deep red hue. Mercury artichokes have a red hue as well and are sweeter than the other varieties, which tend to be savory and nutty (with exception to the Fiesole).

Chianti artichokes are mostly green with just a little red coloring. The King artichoke is red with little green tips, but they are large — sometimes larger than big heart artichokes (which are about a pound) when they’re in peak season. 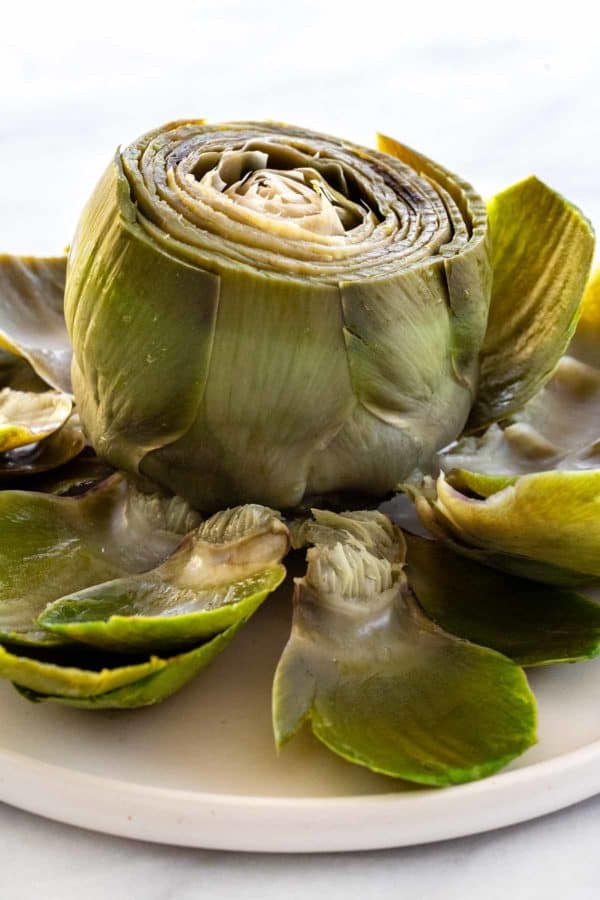 Artichokes contain several vitamins and minerals such as phosphorus, magnesium, and potassium — just to name a few. They provide almost 30% of the recommended daily intake of folate and 22% RDI of vitamin K. Your body uses folate to make blood cells, produce DNA, and convert carbs into energy, while vitamin K is thought to help prevent heart disease and lower your risk of osteoporosis. Artichokes also provide a decent amount of fiber.

It can vary depending on size and variety, but according to the USDA food database, one artichoke contains roughly: 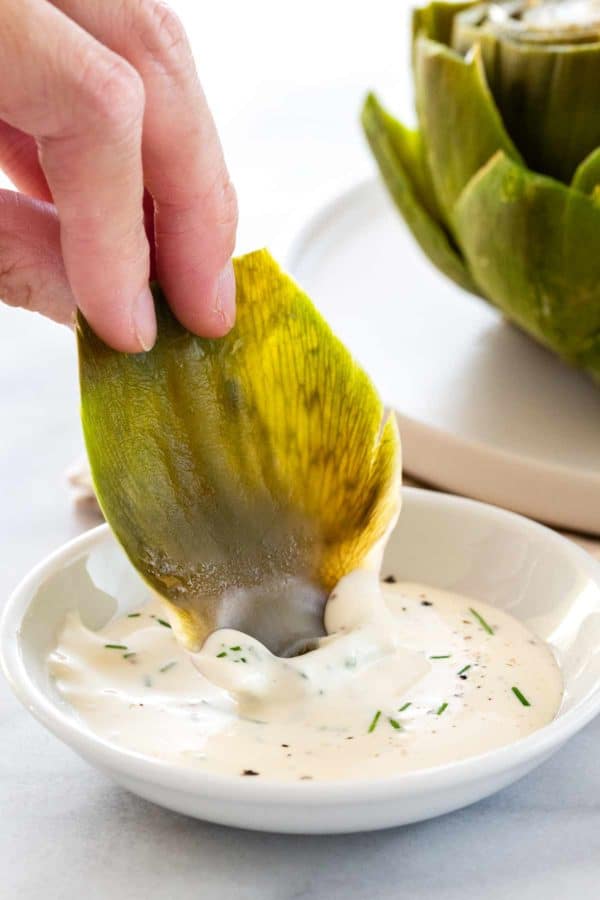 Squeaky leaves indicate fresh artichokes. It should be heavy with tight leaves and have a nice green color (unless purchasing a different variety). Don’t be deterred by red or black coloring, but brown is definitely a sign that the artichoke is spoiling. Avoid spongy and squishy leaves.

If you’re not eating them right away, you can store them in the fridge for about a week in a plastic bag. For best results, sprinkle the artichokes with water and poke a couple of holes in the bag.

Whether eating them raw or cooked, wash and cut off the stems first. They should be able to sit flush on the table. Slice an inch or so off the top of the artichoke and then a tiny bit off the tip of each leaf.

Pull off the leaves and scrape the base with your teeth to eat the fatty parts. Some people like to dip them in cream or butter sauces. Once you’ve eaten all of the petals, there will be a fuzzy center, which you can scoop out to get to the artichoke heart (eat it up!) Depending on the artichoke type, the flavor can vary slightly, but they are usually nutty and sometimes a little sweeter and fruitier. 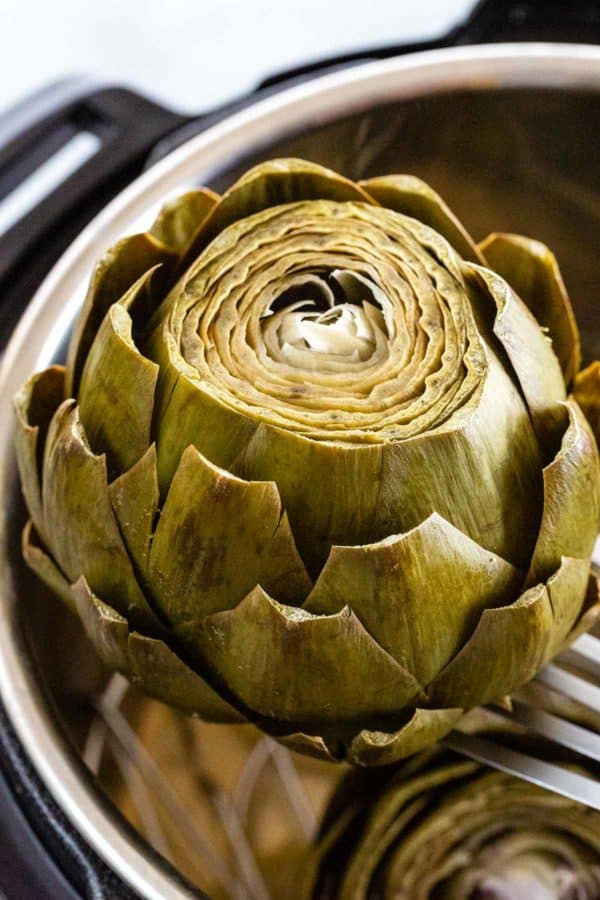 How to cook artichokes

How to steam artichokes: Add artichokes to a steamer basket over an inch or two of boiling water, base down. Reduce the heat to simmer. Cover the pot. Cook for 20-30 minutes.

How to boil artichokes: Add artichokes in boiling water. Make sure they’re submerged. Once the water returns to a boil, lower the heat and let them simmer for at least 20 minutes. You’ll know they’re done when you can pierce the base easily using a fork.

How to roast artichokes: Before you roast, in addition to trimming the stem, top, and leaves like all other methods, cut the artichokes in half and hollow out the center. High heat is best, about 400 to 425 degrees. Drizzle with olive oil and maybe some lemon juice. Season with salt and pepper. Garlic powder is also yummy here, but you can fill them with whatever herbs and spices you like. Place cut side down in a baking dish or sheet. Roast for about 30 minutes, longer if they aren’t tender yet (cover them with foil after the first 10-15 minutes of roasting).

Cooking artichokes in your Instant Pot: Season as desired and add them to the steamer basket base down. Set the vent to sealing and cook on manual high pressure for 10 minutes. Quick-release the steam, and voila! 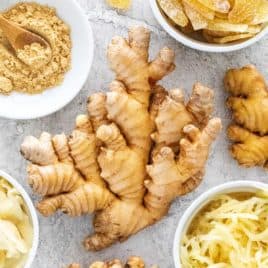 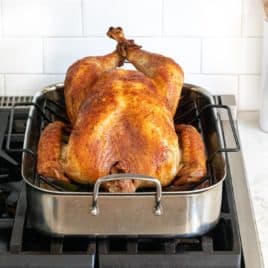 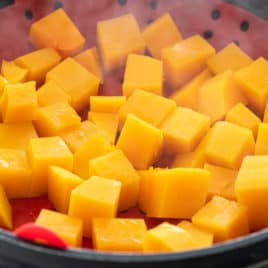