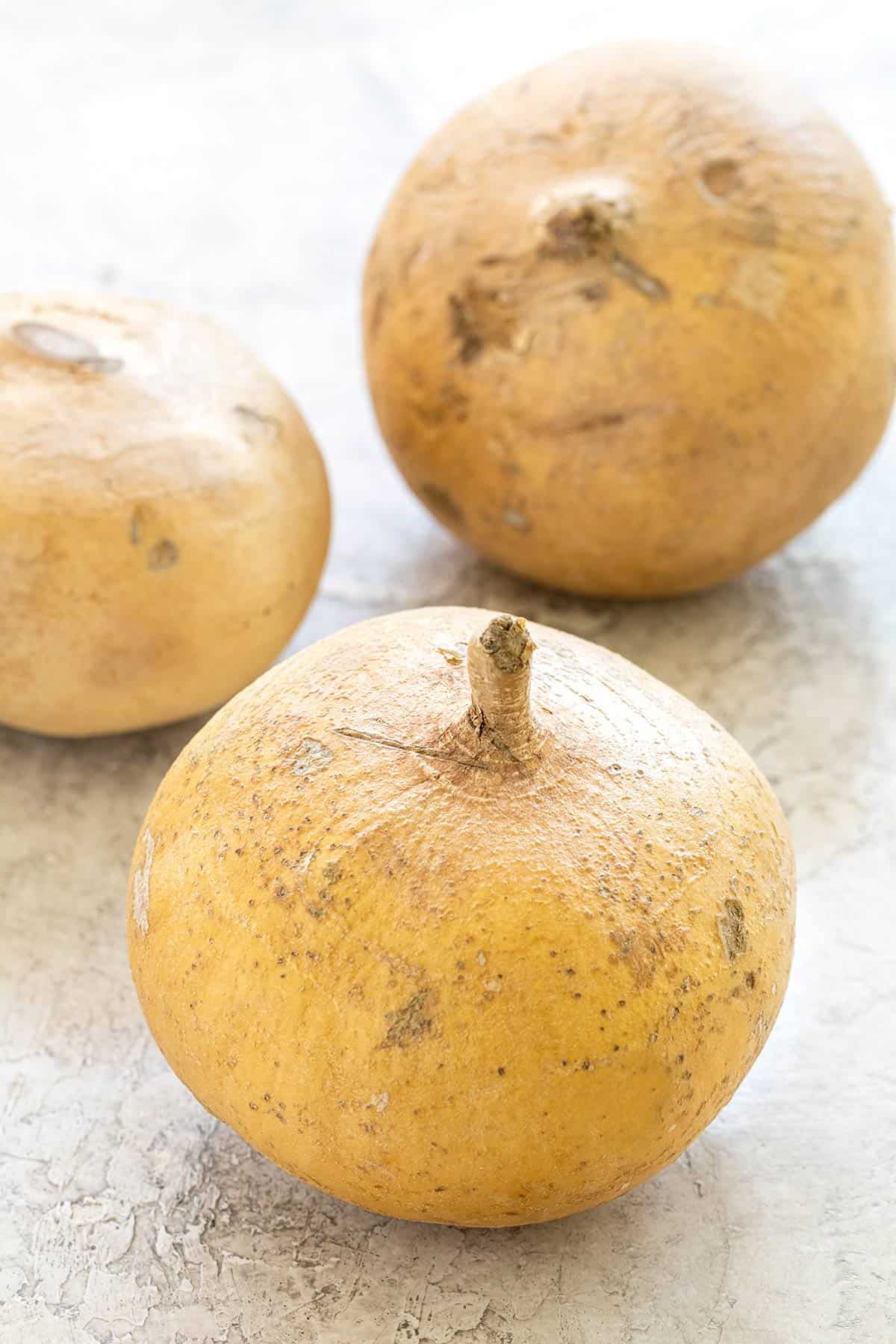 Jicama sounds like a hiccup but tastes like heaven. This Spanish vegetable has a crisp but fresh flavor, and if you haven’t tried it yet, you’re missing out!

Jicama is referred to by several names and terms. The most common are “Mexican turnip,” “Mexican potato,” “Water chestnut,” and “Yam bean.” The more scientific names are Pachyrhizuz erosus, Singkamas, Pachyrhizus tuberosus. It’s part of the Fabaceae or bean family. They are cousins to green beans, peas, black beans, and chickpeas. Jicama is a legume and an edible root vegetable native to Mexico [1].

You can find jicama in most Mexican cuisines. Chefs use it because they add freshness to a recipe, without the unwanted calories. When sauteed and cooked, they add a crisp texture to dishes. In Central America, most people eat it raw. They season with lemon or lime juice to enhance the acidity and add chili powder to boost the spice [3, 5].

What kind of vegetable is it?

Jicama is a legume even though it may not look like a bean. It’s cultivated by its tuber roots. These roots supply fiber, vitamins, carbohydrates, and minerals into one’s diet. They resemble a potato, more so than a bean [2].

Are there different types?

There are two types of jicama. The most common one is called jicama de agua and is widely available at markets within North America. In contrast, jicama de leche is less common to find and eat.

The main difference between the two is that jicama de agua is round and squat with translucent watery color, hence aqua, Spanish for water. Leche in Spanish means milk, and jicama de leche is more tapered in shape with a milky juice coloring [1].

The vegetable itself is brown on the outside with a white interior. The plant can grow up to 20 feet in length, sprouting leaves and seed pods. The roots develop underground and are the only edible portion. The flowers on the plant are blue and white. The legumes or seed pods produce fruit and are removed for the tubers to grow. The tube itself is irregularly globular.

Generally, where is it grown?

Since jicama can only grow in warmer climates, South America, Mexico, Hawaii, Puerto Rico are normally where they can be planted. It originated from the Aztecs and Mayans and is a Spanish vegetable native to Mexico and Central America [2].

How is it harvested?

Jicama is grown as a perennial vine and is annual due to the plant being killed during harvest. It’s planted into the soil and begins to grow like a pole bean. The vining occurs where white and blue flowers bloom, but the root itself is slow-growing and can take up to 6 months.

When the vine dies back some, that’s when you know it’s time to harvest. Farmers carefully follow the vine back down to the tuber in the soil, and use a shovel or fork to lift the jicama out, then cut the vine off [1].

When is the season?

Due to the need of warm temperatures, summer is the best time for jicama to grow. It requires a lot of sun because it’s considered a tropical plant. The growing season is a long period and needs to be undisturbed the entirety of its time.

When eating jicama, most people compare it to an apple, such as a Honey crisp or red delicious. It’s crisp and juicy. But also, it’s somewhat watery and resembles a water chestnut at the same time. It’s sweet and starchy and has a smooth feeling to the mouth.

Can you eat the skin?

Unfortunately, unlike other fruits and vegetables, where the skin contains nutrients and is edible, the skin of the jicama is actually toxic. The seeds and stems that are exposed contain a natural isoflavone compound called rotenone. This is an insecticide that protects the plant from predators. However, rotenone is toxic to humans, fish, and of course, insects.

This insecticide crosses the blood-brain barrier and cell membranes, which can then form free radicals and damage DNA, fatty acids, and other components of the mitochondria. The seed pods can be consumed, but only when they are young. The mature ones develop the rotenone and become toxic [4]. So, honestly, only eat the fleshy root portion.

What to look for at the market

Just like most fruits and vegetables, you look for a firm and unbruised exterior. The jicama should be dry, and the skin should not appear shriveled, bruised, or blemished. It should not be discolored or molded.

Select jicama that are either 4 pounds or under, they provide better quality, whereas larger ones may seem like you’re getting more, but in reality, they’re more fibrous and starchier and not as crisp or sweet [3, 5].

How do you store it at home?

Keep unpeeled jicama in a plastic bag in the refrigerator. This ensures their lifetime of about 2 to 3 weeks. If you cut the jicama, wrap it in plastic wrap and store it in the fridge in a drawer to last for about a week.

Be careful not to store at too low of temperatures, or else you risk chilling injury that causes decay, discoloration, and loss of texture. The vegetable needs to remain dry at all times.

Ways to use Jicama

Jicama is extremely rich in vitamin C and vitamin A. It also contains folate, iron, potassium, and magnesium. The roots have omega-3 and d-6 fatty acids as well [1, 3]. Oligofructose inulin is a prebiotic fiber found in jicama, and this helps to stimulate the growth of “good” bacteria in your gut. The inulin has also been shown to help absorb more calcium in foods we eat, which helps our bone health.

Jicama is also extremely fiber forward and is low in calories. The high fiber content is great for the digestive system by normalizing bowel function and preventing constipation. However, consuming too much fiber can absorb other vital minerals such as calcium, iron, zinc, and magnesium [1, 6].

Is it a superfood?

Jicama is the new superfood and is replacing chia seeds. It contains 3 times the amount of fiber found in oatmeal and has the prebiotic fiber oligofructose inulin. It’s 40% of the calories and carbs of a potato with only 1/10th of the glycemic load, while also containing 43% of vitamin C [5, 6].

If you are on a 2,000 calorie per day diet, one cup of fresh jicama would be the best. Honestly, any more than 1 cup is overboard for your body and too much fiber since it’s already 24% of your daily value [4]. 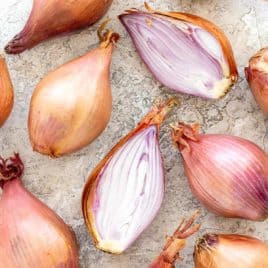 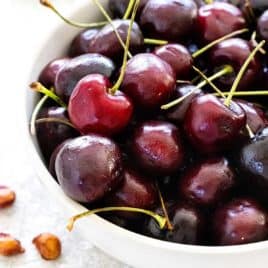 How To Pit Cherries 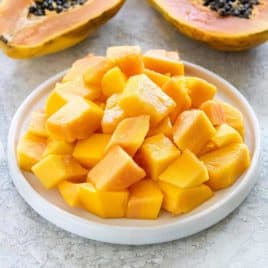 How To Cut a Papaya