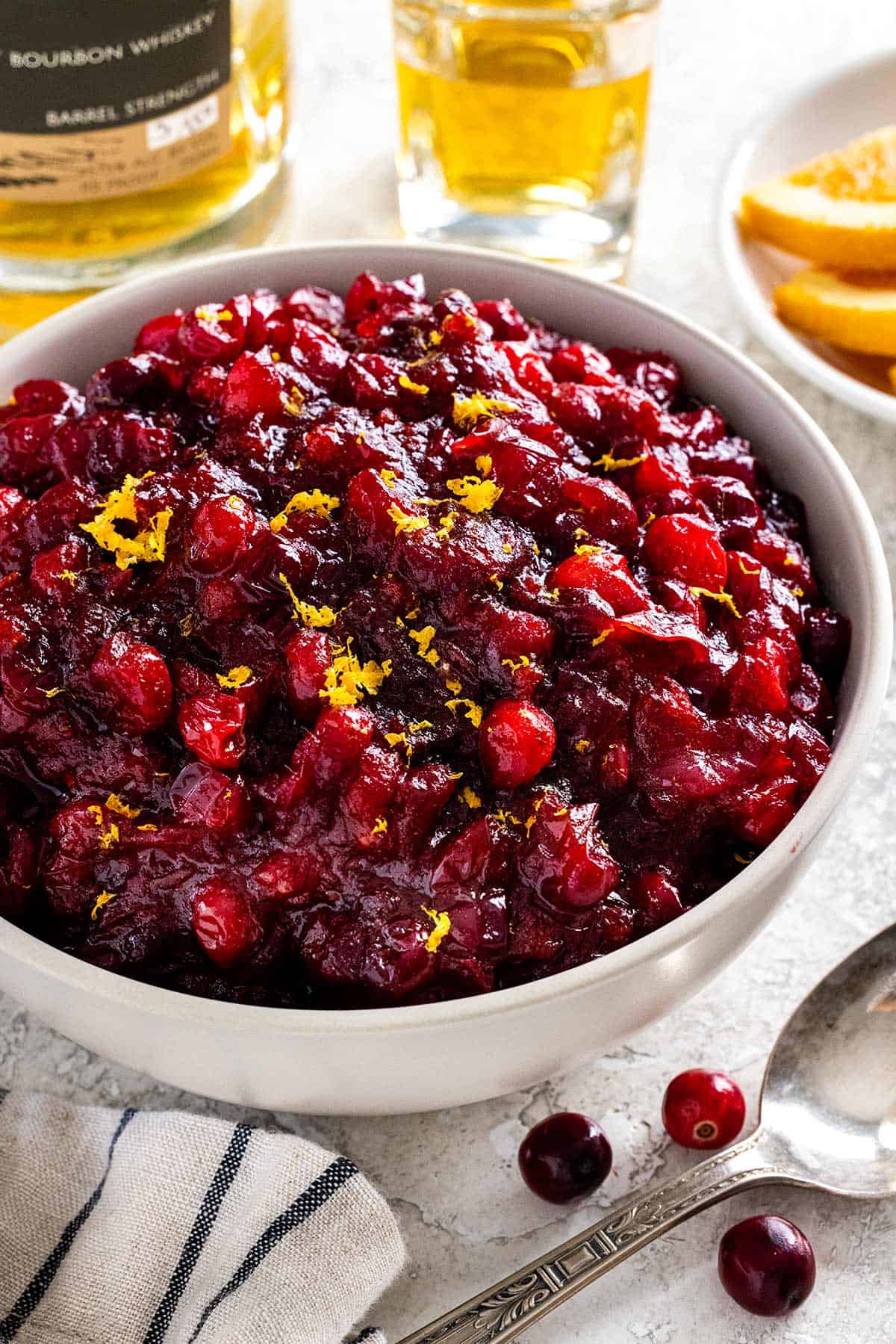 This bourbon cranberry sauce recipe adds a boozy kick to the traditional flavor. This adult version is ready in under 30 minutes for your Thanksgiving feast.

Making homemade cranberry sauce has become a family tradition for the holidays. I’ve made several versions over the years, but I’d have to say adding a splash of bourbon is one of my favorites. Don’t worry. There isn’t a strong lingering alcohol taste. The smokey flavor from the whiskey aged in charred oak barrels infuses into the sauce, adding more complexity.

Fresh cranberries simmer with citrus, whiskey, brown sugar, and cinnamon. Most of the alcohol evaporates, leaving residual oaky notes that complement the molasses in the sweetener. The process couldn’t be more straightforward, and it’s done cooking in just 15 minutes. Make it ahead of time, or serve it warm with your Thanksgiving dinner.

Fresh cranberries are my top choice to make the sauce. However, frozen berries can be added directly to the pan. Just plan for a few extra minutes of cook time. Whole cranberries appear in the market around mid-October. A 12-ounce bag of berries yields about 1 ½ cups of cranberry sauce. Rinse well to remove any dirt and debris before using them.

I use Bourbon whiskey because it adds unique oak and caramel flavor. It’s produced in the United States and made from at least 51% corn that’s aged in charred oak barrels. As you can imagine, this adds a lot of flavors!

Look for the label to call out “bourbon whiskey” since it must be distilled with specific standards. Other types of whiskey will add their own characteristic flavor. If you like to drink it, you’ll enjoy the taste it adds to the sauce.

I add orange juice, dark brown sugar, and a cinnamon stick to complement the bourbon. Granulated white sugar works well, but it won’t have the molasses notes. If you have some in your pantry, maple syrup is a flavorful swap. The cinnamon enhances the aged, oaky notes of the whiskey. The acids in the citrus brighten up the tangy sauce. Add freshly grated orange zest to bump up the orange aroma.

Simmer the ingredients together over medium-low heat, stirring to dissolve the sugar. After a few minutes, the berries pop, releasing pectin, and the sauce thickens to a jammy consistency. Depending on how thick you like, this only takes about 12 to 15 minutes. You could even make slow cooker cranberry sauce for the ultimate hands-off recipe.

Serve the bourbon orange cranberry sauce warm, at room temperature, or refrigerate. You can store it in an airtight container in the refrigerator for up to 1 week. Alternatively, freeze in a resealable bag for up to 3 months. Defrost when you’re ready to use it.

What’s the difference between bourbon and whiskey?

Bourbon is a type of whiskey that’s American-made. It must be distilled with at least 51% corn. The rest of the grain mixture, or mash, can be composed of wheat and malted barley. It’s aged in new, charred oak barrels to give its characteristic smoky, caramel, vanilla taste.

Can other types of alcohol be used in cranberry sauce?

Sure! Other types of whiskey can be used, like scotch or Irish whiskey. Dark rum, reposado tequila, brandy, or cognac are good swaps for bourbon.

Does all of the alcohol evaporate from the sauce?

Although alcohol has a much lower boiling point of water, at 173.1ºC (78.4ºC), it will not completely evaporate from the cranberry sauce. There will be about 40% of the alcohol remaining in the sauce. However, it will not taste strong. It will have smoky and oaky notes instead of alcohol. If you want a strong bourbon taste, mix in about 1 tablespoon after the sauce thickens. For less taste, reduce the amount of alcohol added to 1 to 2 tablespoons.

For this Thanksgiving dinner, make a bourbon cranberry sauce and add a flavorful boozy twist to the traditional recipe. 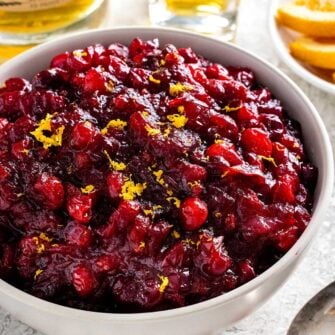 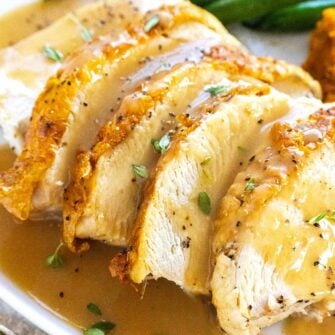 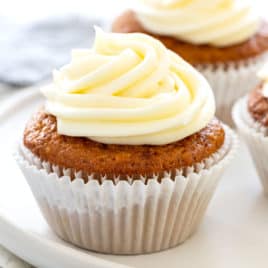 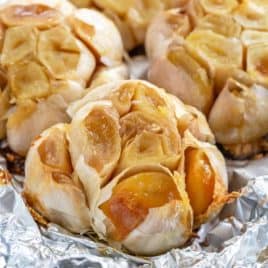 How to Roast Garlic