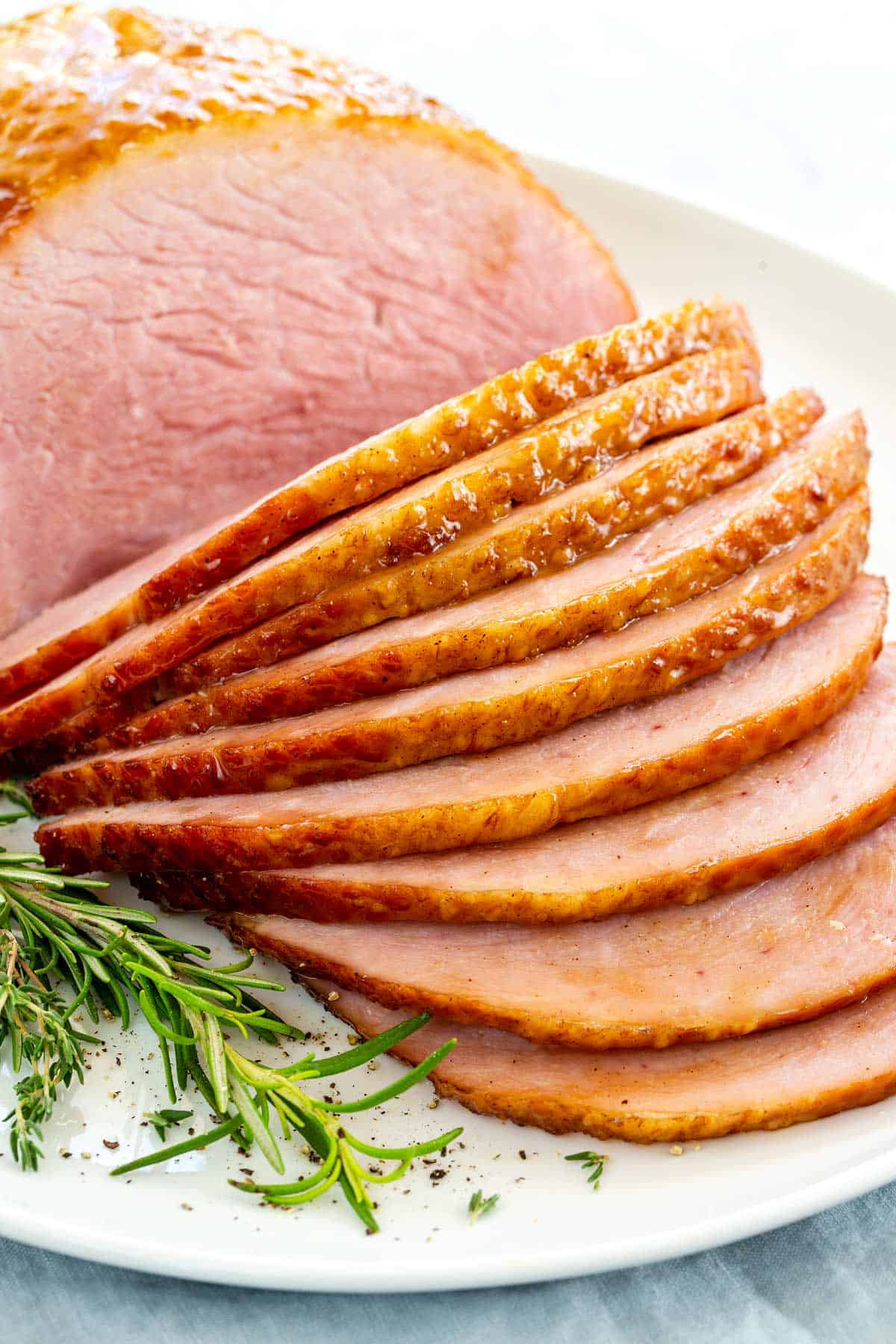 Crock-Pot ham simmers in maple syrup and brown sugar sauce for an easy and flavorful meal made in the slow cooker. Once the meat is ready, the sauce is reduced to a thick and syrupy glaze to brush on top. Perfect for holiday gatherings! 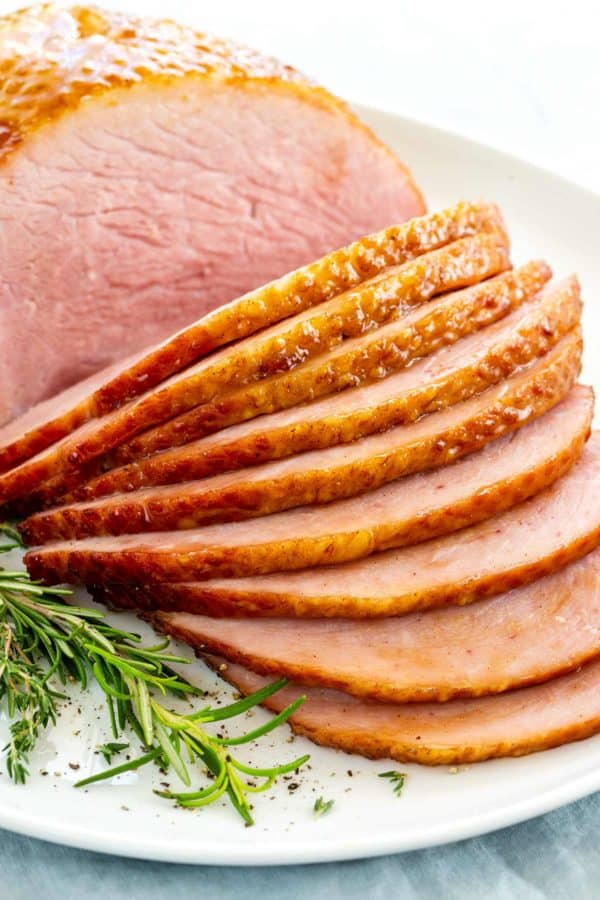 A holiday ham is an essential main course for special occasions. Using the slow cooker method frees up time because all that’s needed is to mix, add to the pot, and simmer. Plus there’s a bonus- there’s no need to share oven space while other parts of your feast are being prepared. In fact, this recipe is so easy, you don’t have to wait for a celebration to enjoy.

The beauty of preparing Crock-Pot ham is that the meat is already pre-cooked. The key is to gently reheat it so that the texture stays tender while infusing a boost of sweet spices. A mixture of maple syrup, brown sugar, pineapple juice, mustard, cinnamon, nutmeg, and cloves creates a candied sauce that is later reduced to a syrupy glaze. 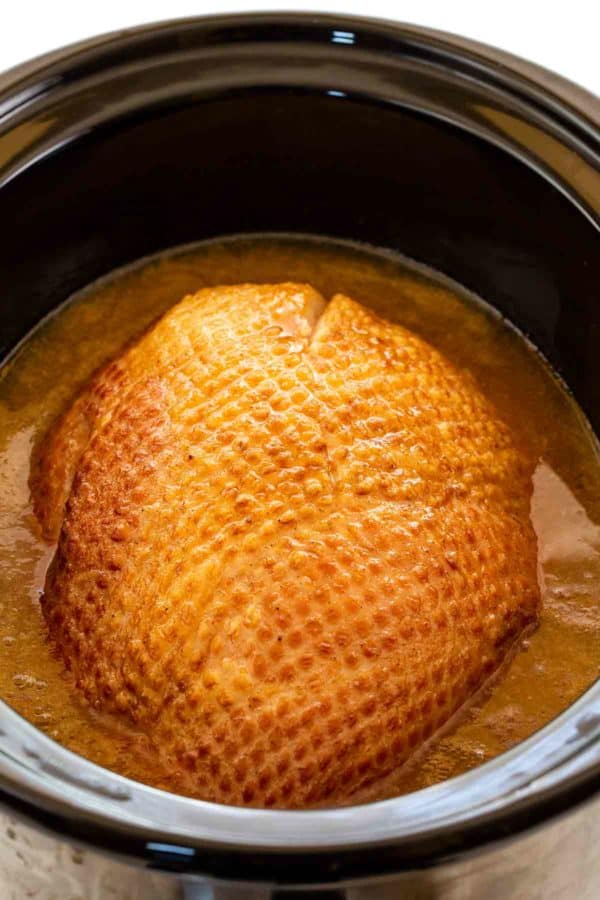 How to cook ham in a Crock-Pot

What type of ham do you purchase for slow cooking?

A cured, uncured, or smoked ham can be used in a Crock Pot. The grocery store also provides the choice of unsliced boneless ham or spiral cut ham that is bone-in, which is the least processed. Avoid water-added ham as the flavor is greatly diluted. It’s really up to you for the presentation.

I use a 5-pound uncured boneless ham that fits perfectly in my 6-quart sized Crock-Pot. I like that it’s really easy to cut, but the only downside is the sauce doesn’t seep into the meat like it would when pre-sliced. That’s okay, I brush a little extra glaze on right before serving. 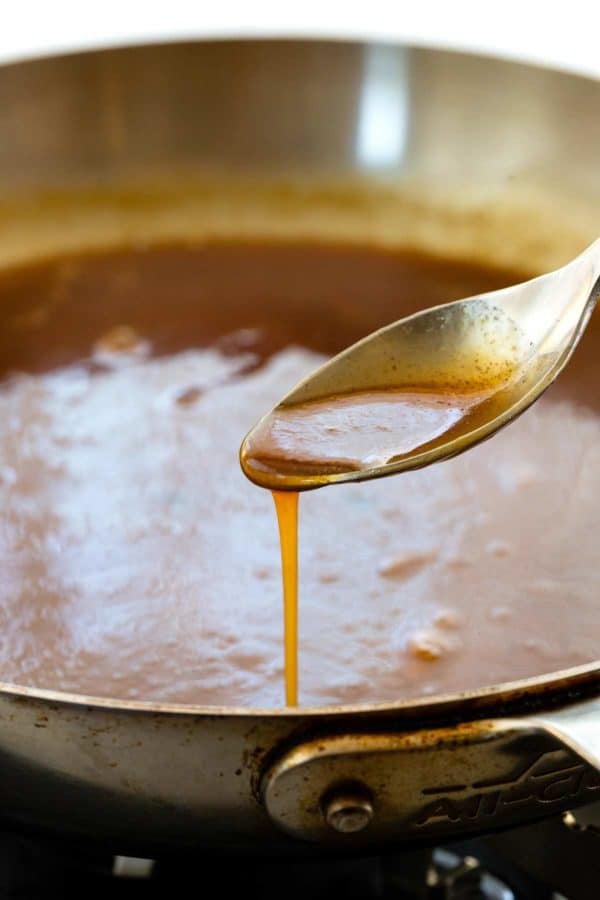 How much ham do you buy per person?

It can be a little unpredictable how much each person might eat. To be on the safe side you can use this formula for feeding guests at a holiday dinner:

This is a good estimate if the ham is the main entree. With a 5-pound boneless ham, I was able to get 20, ¼-inch thick hearty slices. This would feed 8 to 10 people if they have 2 slices each. For a bone-in ham, you would then need between a 6 ¼ to 7 ½ pound ham.

What other ingredients do you add to the ham as it cooks?

To warm the ham in the slow cooker and keep it moist, a spiced maple sauce is added. Maple syrup and brown sugar give a deep molasses flavor. Some pineapple juice and Dijon mustard add some tartness to balance the sweeteners.

A combination of cinnamon, nutmeg, and cloves adds that cozy Christmas aroma and punch of flavor to the glaze. I figure no more salt is necessary because some will infuse into the liquid from the ham as it simmers. For a spicier taste, some freshly cracked black pepper or ginger (fresh or ground) are great additions. 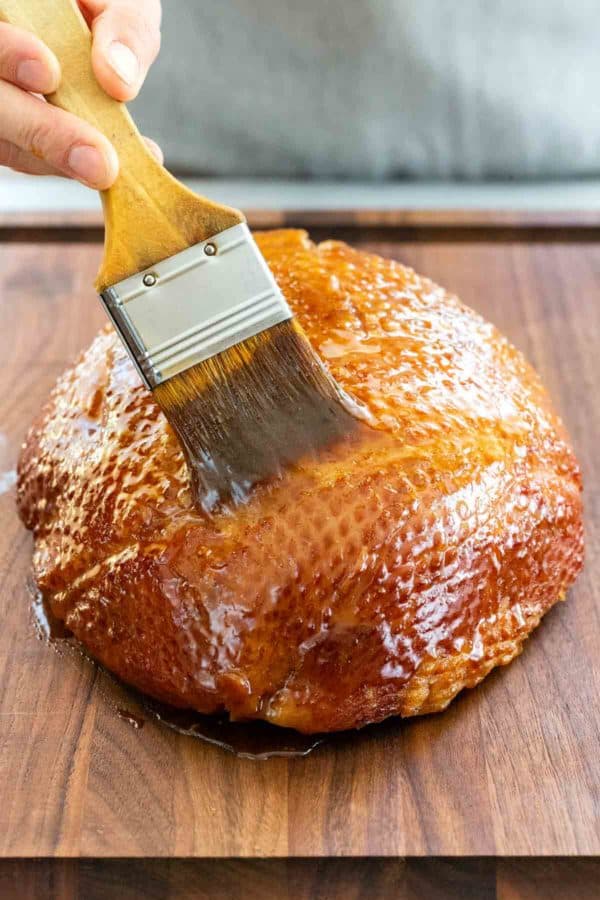 How long do you cook ham in a Crock-Pot?

The ham is ready when it reaches an internal temperature between 135 to 140ºF (57 to 60ºC). Remember, the goal is to rewarm and not overcook. For a 5-pound boneless ham, it will take 3 ½ hours on “Low” heat in the slow cooker. Spiral cut or larger cuts may need an additional 1 to 2 hours depending on the size.

Sometimes it takes longer for the bone inside the ham to heat, and the surrounding protein. The best indicator for doneness is using an instant-read thermometer to check the temperature every 30 minutes after the minimum recommended cook time. Transfer the meat to a cutting board and allow to rest as you make the glaze.

Make a glaze for the ham

The flavorful sauce that remains at the bottom of the vessel is sweet, savory, and full of spices. Don’t let it go to waste! Simply reduce the sauce by boiling off excess moisture. This concentrates the sugar solids, creating a luscious, and sticky glaze.

Apply the glaze with a basting brush over the ham and it will cling to the surface, creating a mouth-watering crust. Serve the extra glaze warm on the side. I made sure to have extra for you because it’s so good.

If you have any leftover ham, use it the next day in a breakfast casserole, eggs benedict, or add it to fried rice to make it a little more exciting. 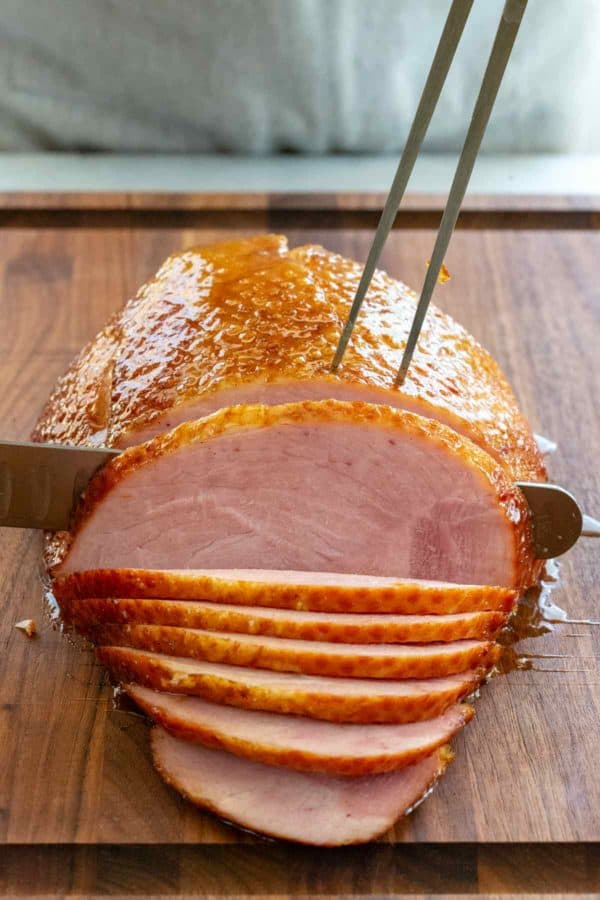 Rest the meat before slicing

After hours of reheating in the slow cooker, resting meat gives the muscle proteins a moment to relax and hold on to more moisture before carving. There is also carryover cooking that happens that ensures the meat is warmed to the center without risking overcooking.

Crock-Pot ham simmers in maple syrup and brown sugar sauce for an easy and flavorful meal made in the slow cooker. Perfect for holiday gatherings! 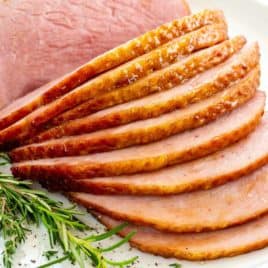 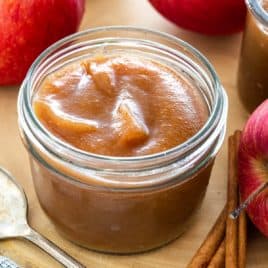 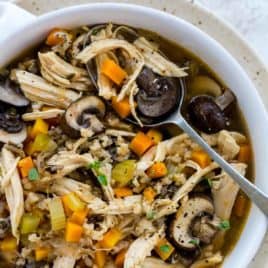 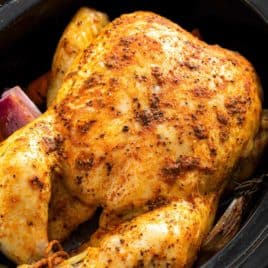