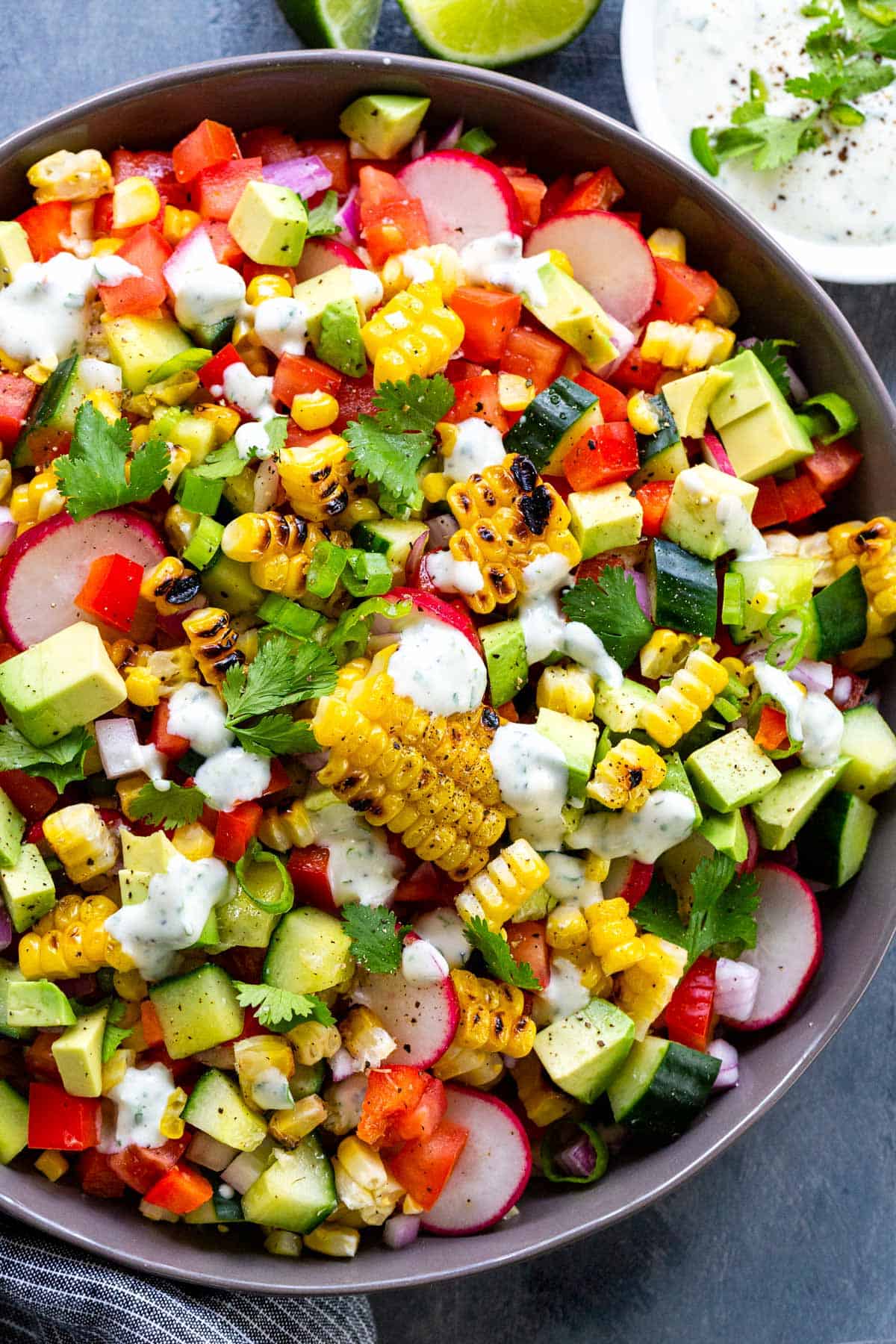 Grilled corn salad drizzled with creamy lime dressing. Fresh ears of corn are roasted on the grill to add a smoky flavor. Serve it alongside your favorite protein for a complete dinner! 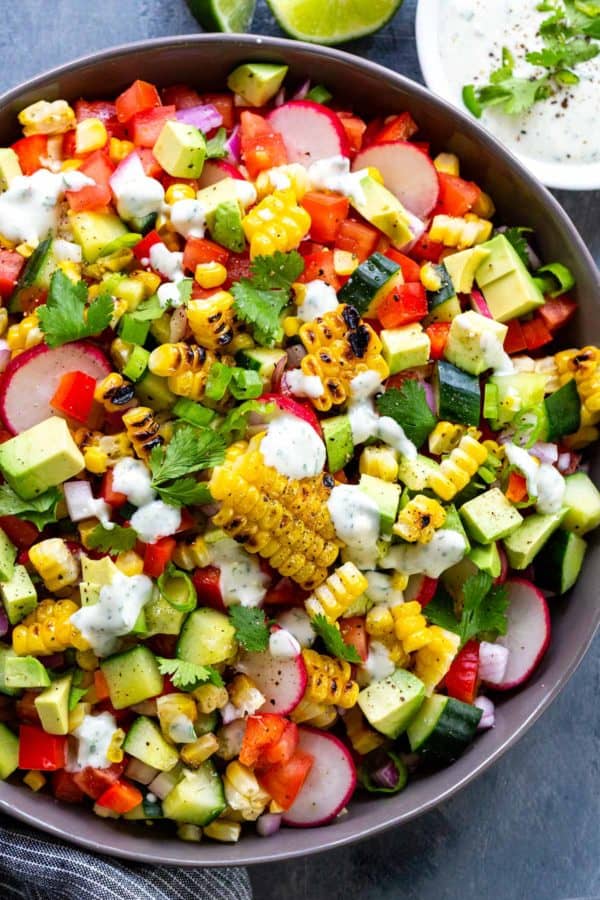 As the weather warms up there’s no better time to fire up the barbecue and cook outside. This Mexican-inspired grilled corn salad is made up of ripe tomatoes, cucumbers, onions, bell peppers, radish, avocado, and green onions.

This colorful and crunchy vegetable mix is tossed with a creamy lime dressing that has nice a spicy kick. Serve this side dish with grilled chicken or steak to create easy weeknight dinners. This salad is also perfect to bring to your next potluck.

How to make grilled corn salad

Cooking corn on the cob

There are various ways to cook corn on the cob although, only the grill can achieve a flavorful smokey char. It’s the perfect time to dust off the barbecue and practice your grilling techniques.

I like to remove the husk so that the surface sizzles and browns on the grates for instant flavor. Coating the corn with a light layer of olive oil protects it from completely burning. 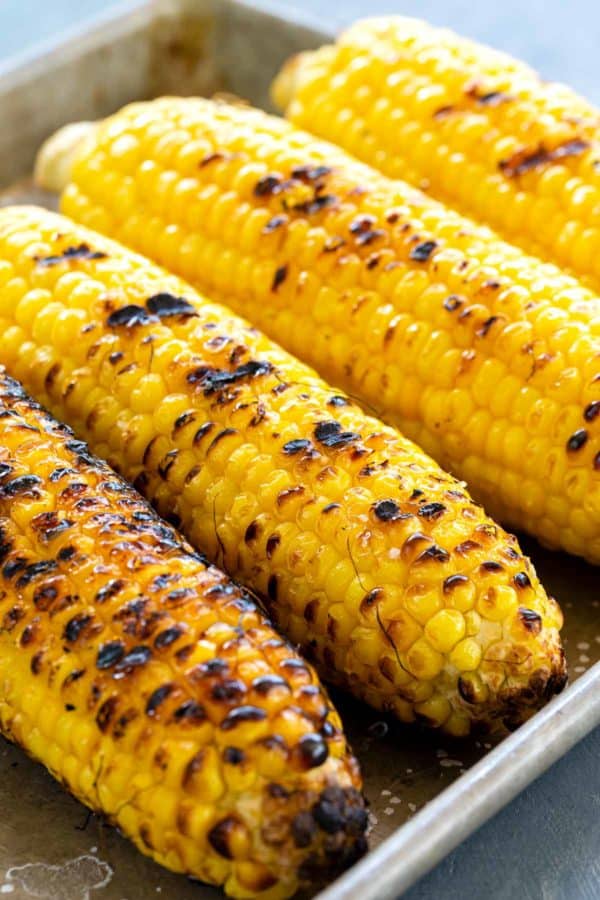 No grill? Use canned or frozen corn

Corn is at its peak season from June to September, so the remainder of the time canned or frozen corn comes in handy. Simply defrost and drain well, then add to a hot frying pan or cast iron skillet with a little bit of oil or butter. Saute on high heat, stirring every few minutes until the outside of the kernels lightly brown. Allow it to cool then mix the corn into the salad.

For intense crunch factor, add diced English cucumbers, red and green onions, red bell peppers, and radishes. Ripe chopped tomatoes add some juiciness. If you have cherry tomatoes on hand slice them in half and toss them in.

Pieces of bright green and creamy avocado add some richness and healthy fats to the dish. If you want to add extra protein to this vegetarian recipe, canned or homemade black beans are a great option. 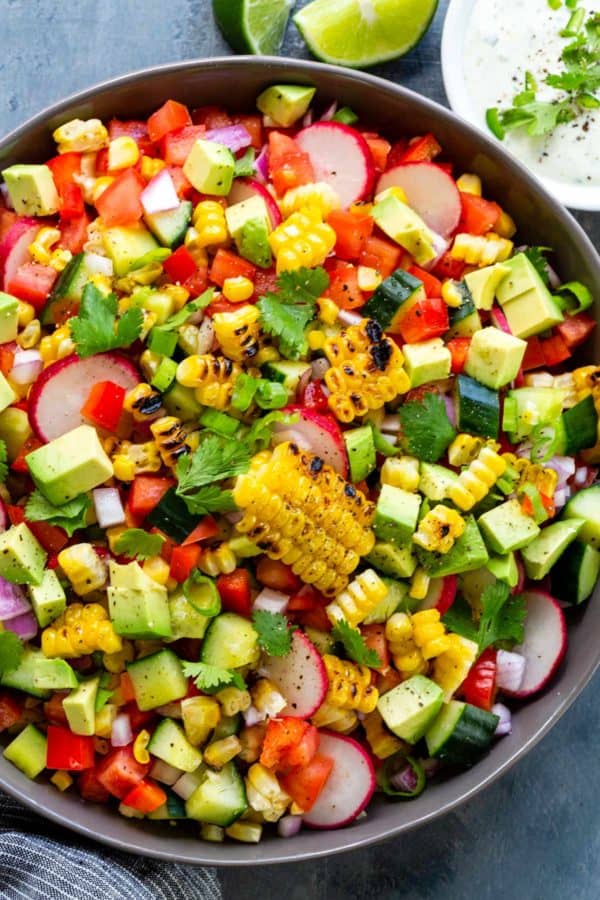 The base of the dressing is crema, a Mexican table cream. It has a very light tartness, but with a pourable consistency. Sour cream or even plain yogurt would work, but you may need to bump up the sweetener level and add some water to thin out the dressing.

The crema gets whisked together with freshly squeezed lime juice, zest, honey, chopped cilantro, minced serrano peppers, garlic. Season with salt and pepper as needed. I noticed that over time the sauce gets spicier, and lasts for up to 4 to 5 days refrigerated in an airtight container.

This hearty grilled corn salad is great to pack up and bring to a picnic or potluck. The robust ingredients store well, about 5 days. However, I recommend cutting the avocado the day of serving so it does not turn brown.

The recipe makes a large batch for feeding a crowd or meal prepping. Generously top with the spicy lime dressing and your tastebuds will be happy. Enjoy! 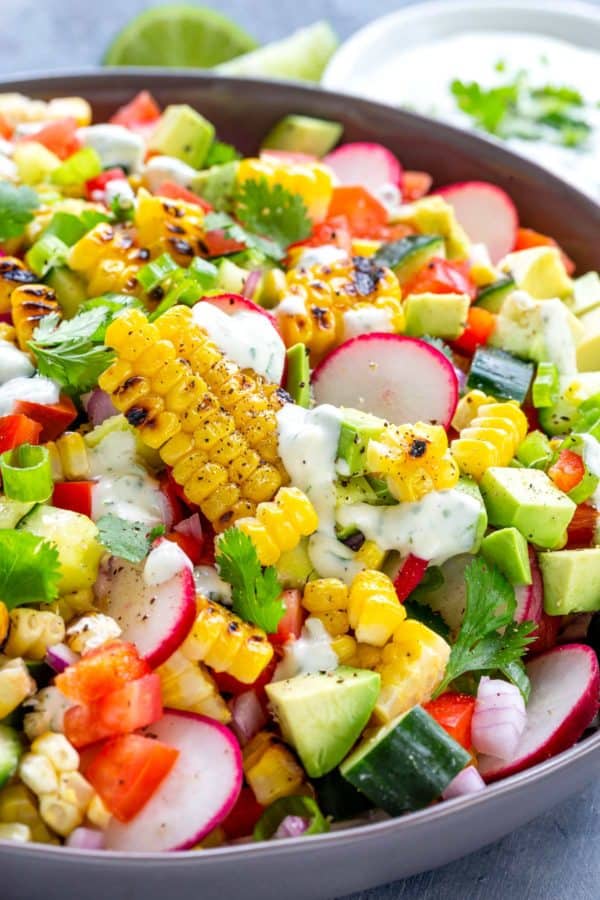 Grilling corn with the husk removed

Removing the hush and silk allows direct contact with the hot grill to brown the kernels very quickly. When using this method brush the corn with a high temperature cooking oil like olive oil or vegetable oil to create a thin protective barrier so that it chars nicely, but won’t burn.

Grilled corn salad drizzled with creamy lime dressing. Fresh ears of corn are roasted on the grill to add a smoky flavor and mixed with colorful vegetables. 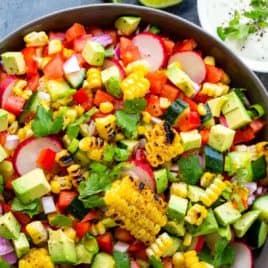 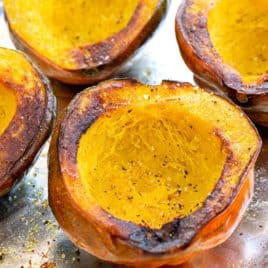 How to Cook Acorn Squash 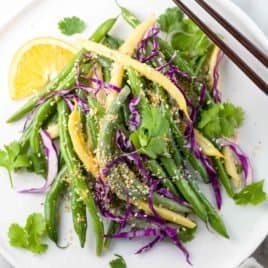 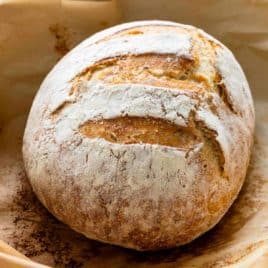