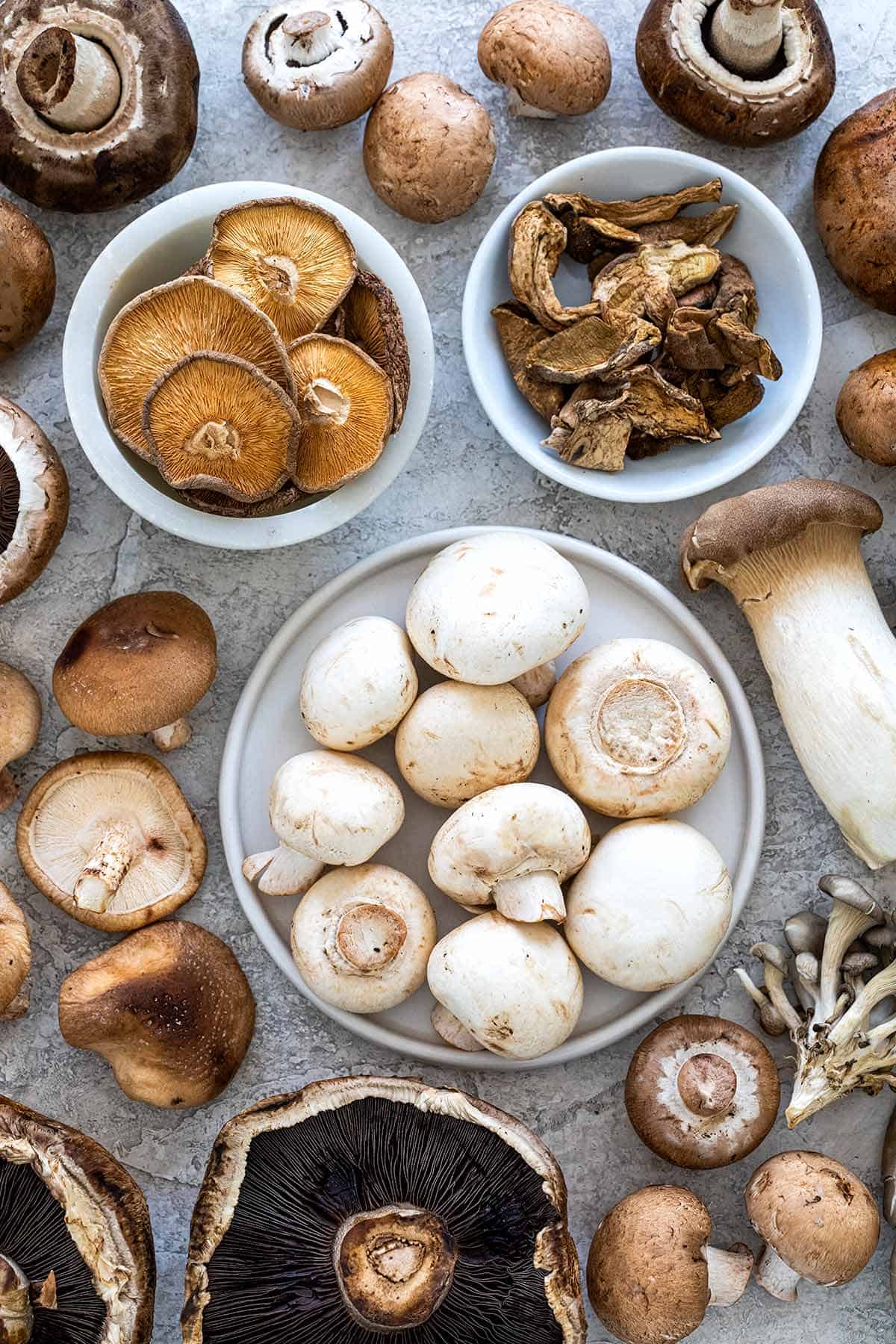 There are many types of mushrooms available, way more than what you typically see in the produce aisle. Let’s learn about this edible fungus and all it has to offer.

Mushrooms come in various sizes and shapes — just go to any specialty Asian market, and a whole world of choices will open up to you. What’s to love? Mushrooms give ramen, soups, stews, and sauce a heavy dose of umami. Chefs rely on their meaty texture and savory taste.

Although their flavor isn’t their only superpower, mushrooms have been used medicinally for ages, and now they’re popping up as powders mixed with adaptogens you can dissolve into shakes, tea, and soups (1).

Mushrooms are a good source of beta-glucan, a soluble fiber linked to better heart health (2). They also contain a variety of B vitamins, which help keep your insides functioning correctly. They’re one of the best sources of selenium in the produce aisle, a powerful antioxidant that benefits your immune system. White button mushrooms specifically are a great plant-based source of vitamin D (3).

Lastly, mushrooms are a versatile ingredient in the kitchen. You can boil, saute, grill, braise, and fry them. They play nice with other common ingredients like herbs, spices, garlic, soy, and even vinegar and citrus. While there are thousands of types of mushrooms, here are some types you can buy at the store.

Great for sauteeing with a soft texture, white button mushrooms are the most common type you see in grocery stores. They have a light flavor that gets stronger as you cook them. However, even then, their flavor is mild, making them an ideal match for other seasonings and ingredients.

Cremini mushrooms have more flavor than standard button mushrooms, and therefore also tend to be a smidge more expensive. However, they’re technically the same mushroom, just harvested later (4). That also makes them a bit firmer than button mushrooms, so they’ll hold up better in liquid, for example, when cooking soups and stews. They also have a deeper mushroom flavor.

Sometimes lighter brown and sometimes darker, shiitake mushrooms are firm but chewy. They have more umami, savory, and earthy flavor than button, cremini, or portabello mushrooms. You’ll see them in peak season, spring through early fall. When cooking, saute, boil, grill, or fry them.

These are also called “Hen of the Woods” mushrooms, and unlike other varieties, they have a delicate texture. They’ve also been described as feathery and frilly. If you hate the spongy texture of most common mushrooms, you might love maitake mushrooms. They can be sauteed, grilled, or braised into a sauce. They have a shorter season in the fall, and you might have better luck finding them at a specialty Asian market.

Matsutake mushrooms take things up a notch in the flavor department. You might also hear them called pine mushrooms because they grow by pine trees. They have a more intense flavor and are sometimes even described as spicy (both in smell and taste). They’re at peak season late summer, into fall, and through early January. They have a longer, thicker stem and work well marinated into broths and soups, and are often added into stir-fry dishes.

These funky, chewy mushrooms look exactly like they sound — little wood ears. They’re freshest early summer through early winter and have a woody taste. Cooked, they’re best boiled, sauteed, or added to stir-fries. They are also a common ingredient in hot and sour soup.

These will catch your attention because they’re much thicker than other varieties, with a stem nearly as wide as the cap. They resemble little tree stumps and are sometimes compared to the shape of a bowling pin. When cooked, they develop the umami flavor. They hold up well in soups and stews because they’re firm like portabellos. You can also fry them and make tempura.

Enoki mushrooms are known for their very mild flavor, not earthy or overly pungent. They’re a little sweeter than other types of mushrooms when cooked, and they become soft with a bit of chew to them. If you’re a ramen lover, they’re the perfect mushrooms to try in your next batch.

They may look like they come straight from the sea, but clamshell mushrooms grow on beech trees. While they don’t come from clams, they have a mild shellfish flavor, which comes out when you saute them at high heat (the preferred cooking method for this shroom). They also taste great in soups and sauces.

Chanterelle mushrooms like tiny yellow wildflowers, and they smell fruity. But don’t let that deceive you; they have a mild peppery taste. Try browning and caramelizing them whole in a saute pan.

The caps on hedgehog mushrooms are slightly orange, and they’re sometimes compared to chanterelle mushrooms. They also have a fruity smell and a peppery taste. Some chefs describe their flavor as earthy and nutty.

The morel mushroom is similar to beloved truffles, intense, and they bring an earthy flavor to your cooking. They resemble little sponges. They can be black or yellow, and many people like to dehydrate them.

Porcini mushrooms are on the rich side of the flavor spectrum. They work well in risotto and pasta dishes, giving them an intense woodsy flavor. They have even more flavor when they’re dried.

Pick mushrooms that are firm and smooth. They should look plump. Avoid mushrooms with bruises and that are shiny. Plan to use them within a few days of purchasing.

It’s a heavily debated topic, but you can wash mushrooms before use (5). Just do it before you slice them, and pat them dry afterward. To prepare dried mushrooms, pour boiling water over them and let them sit for about 20 minutes.

According to the USDA, 1 cup of raw sliced mushrooms contains: 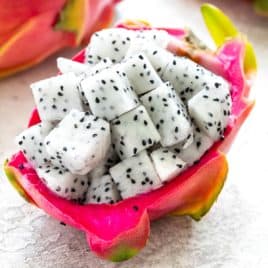 How to Cut Dragon Fruit 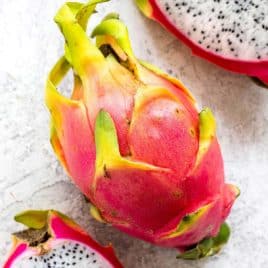 What is Dragon Fruit? 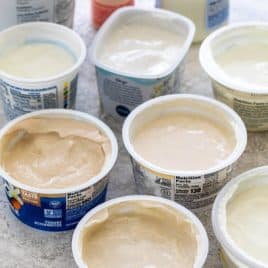