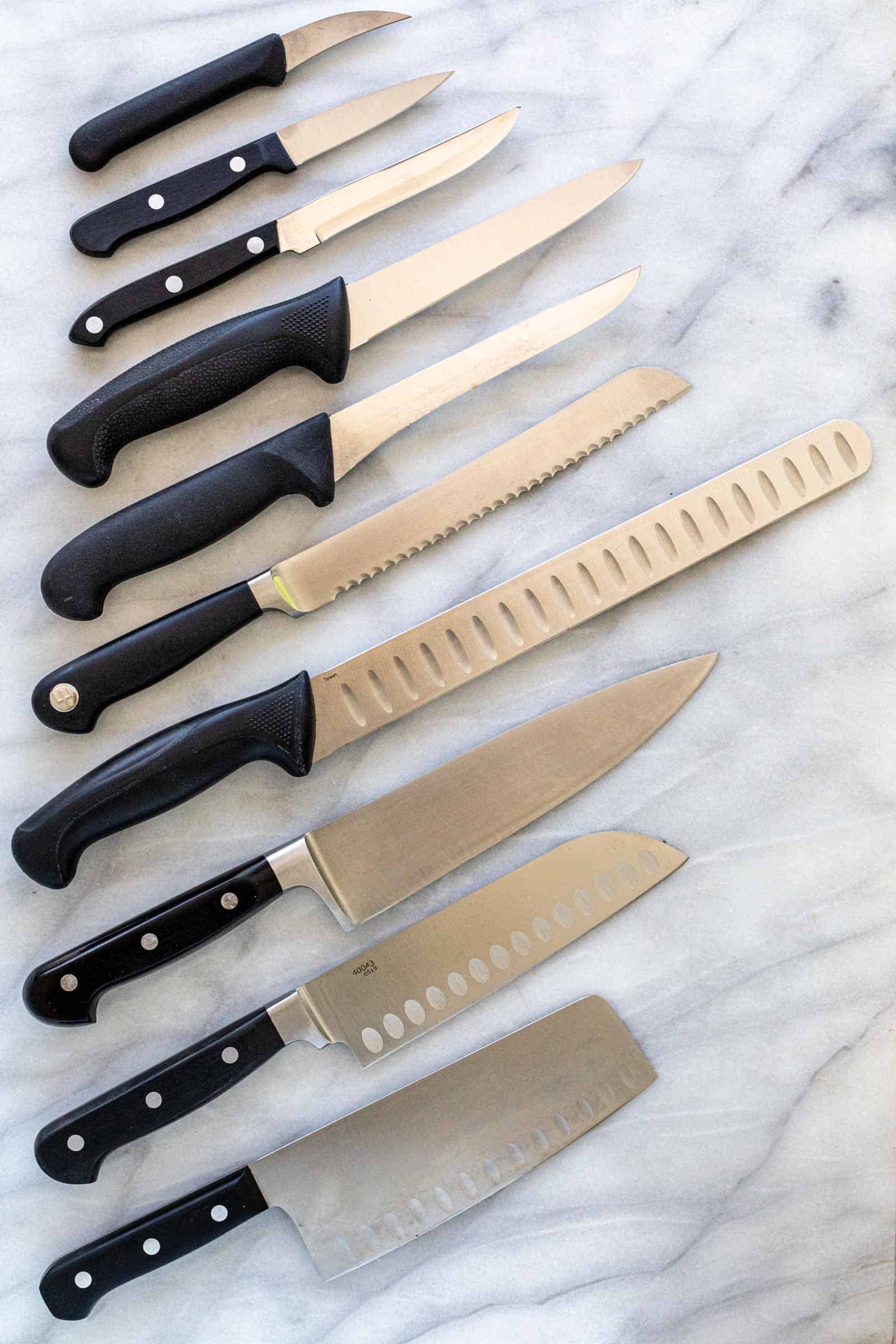 This guide is for the inquisitive home cook to learn about the most common types of kitchen knives and their uses. Upgrade your tools and it might seem like anything is possible in the kitchen. 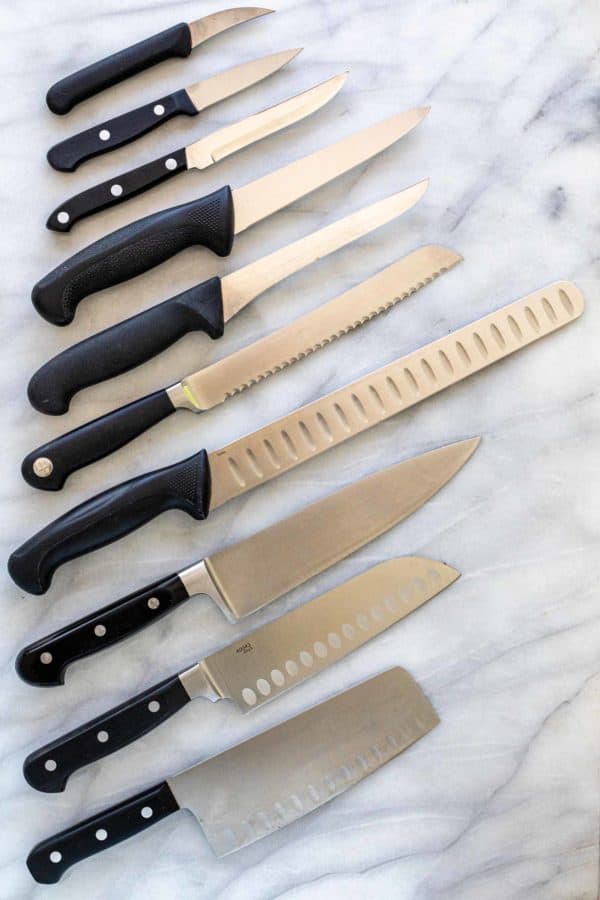 Maybe you’ve just purchased a knife set and realized you don’t actually know what each is meant for. Maybe you’ve had a knife set for a while and you’re starting to wonder how the ones you never use might make your life easier. Either way, understanding the different types of kitchen knives and how to use them can open up a whole new world. Grab a knife and board and let’s get cutting! 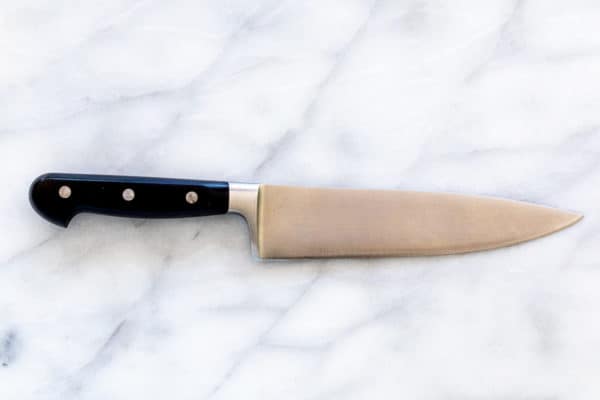 A chef’s knife is one of the most versatile tools. Any professional chef will tell you this is a must-have. It should feel like an extension of your arm. It’s a go-to for chopping and dicing vegetables, fruit, and herbs. As well as cutting a variety of other ingredients like meat, poultry, and fish. They are usually 8 to 10 inches long, and the blade rounds at the tip. Don’t use it to peel small produce (it’s too large to be precise) and avoid using it to carve cooked meat. 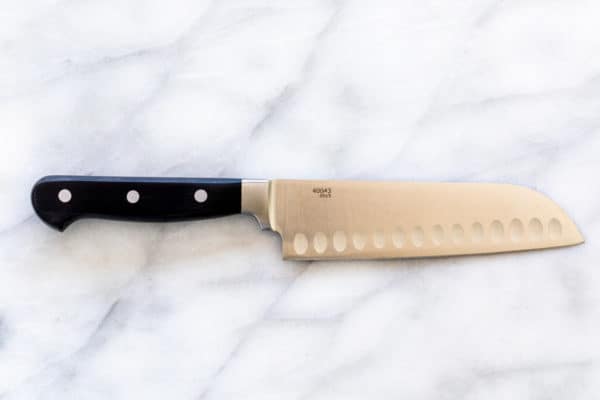 With more of a straight blade, it has small indentations that make it easier for food to slide off. Like a chef’s knife, it’s also very versatile, great for chopping, dicing, and mincing ingredients, or slicing cheese. You can use it for just about anything you’d use a chef’s knife for; both are great all-purpose knives. 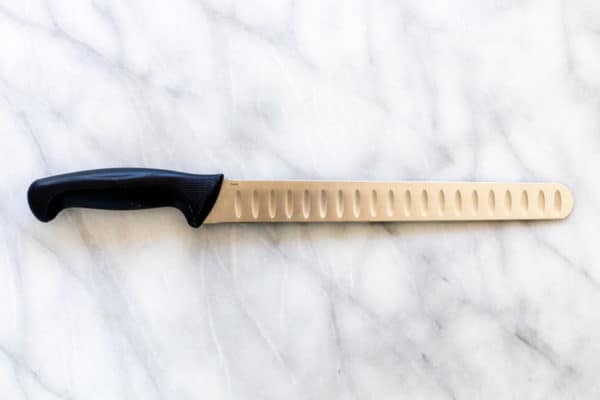 Now, we’re getting a little more niche. After cooking a large cut of meat like beef, pork, or roasted turkey, a carving knife comes in handy. They are more narrow for precision and can be longer for slicing through wider pieces. They may have indentations on the side of the blade to make it easier to release each slice. 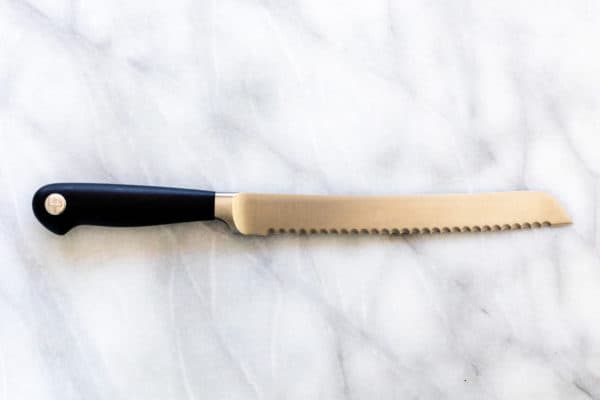 Bread knives are long and have serrated edges. They easily carve through soft or crusty bread without sacrificing its integrity. When using, move it more like you would a saw than a chef’s knife. In addition to slicing bread, they can be used with other baked goods, too like cake. Other than bread, you can use them to cut large melons where straight blades often get stuck, slicing tomatoes, and breaking bars of chocolate into smaller bits. 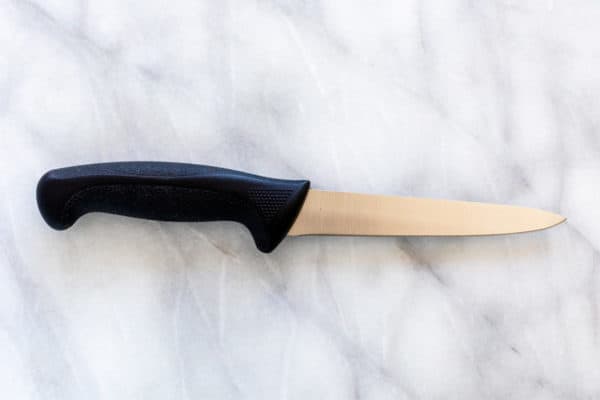 Utility knives are smaller than chef’s knives but not quite as petite as paring knives. They’re great for slicing and chopping small to midsize vegetables and cuts of meat. A serrated utility knife comes in handy for slicing sandwiches as well. A straight-blade utility knife is helpful when peeling produce, though sometimes that’s better left to paring knives. 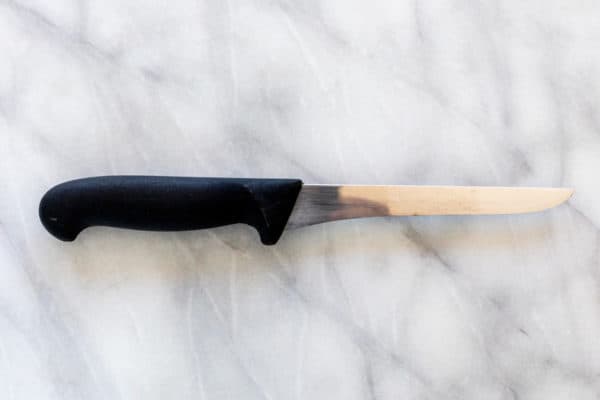 A boning knife has an extremely narrow and flexible blade that tapers to a pointed tip. It’s used to debone cuts of meat more efficiently and reduce waste in the process. It can cut through those tough connective tissues and joints that other knives struggle with. Just remember, cut around bones, not through them. I also use it to remove the skin from fish as it helps to easily separate the flesh. 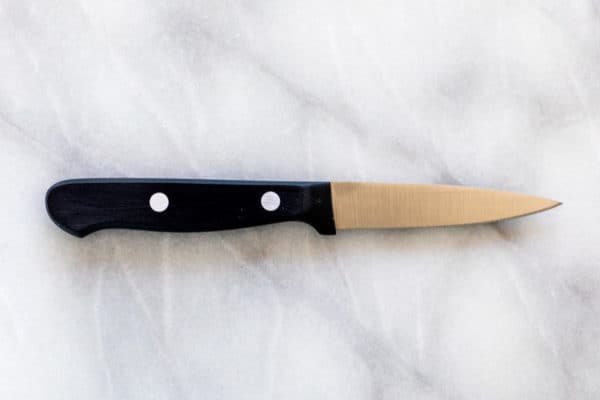 Paring knives are proof that you should never judge a knife by its size. This little piece of cutlery has a very thin blade that’s super sharp. It expertly peels, chops, slices, minces and removes seeds. It’s my go-to for slicing fruit or cutting up hot peppers. Though you don’t want to cut large meat or large produce with it, you can use it for just about everything else and you’ll find yourself reaching for it a lot. It’s available in either a straight or serrated edge. 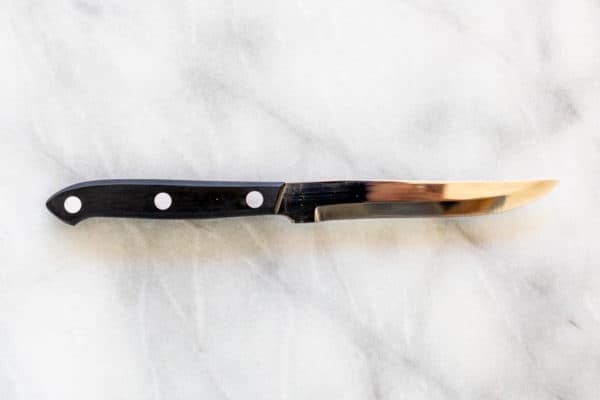 Steak knives are less for cooking and more for eating. They should be set at the table with any good steak dinner. They are sturdy and sharp so that you can enjoy those expensive steaks with ease, cutting it like butter. They are often sold in sets, with a straight or serrated edge. 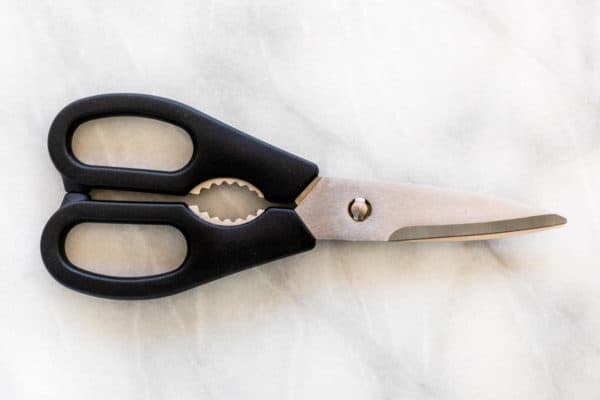 More like scissors than knives, kitchen shears are used to cut herbs off their vines, chop salad greens, and open up the packing on processed foods. You can also use them to cut bacon into small pieces if you’re adding it to pasta or a cobb salad. Try using shears to cut canned and jarred goods — think canned whole tomatoes or jarred chilies. You can also use shears to cut pieces of meat into bite-size chunks, say if you’re making a stir-fry with chicken. 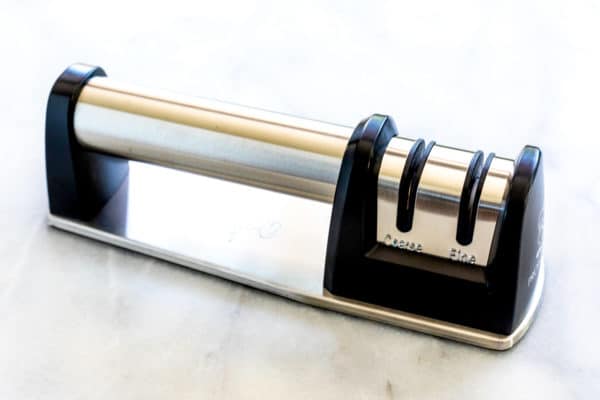 Every good knife collection needs a knife sharpener, and there are a few different types. You can buy sharpening stones which are like little metal bricks with coarse to fine grit. The blade edge is held at an angle, then drawn down the stone until it becomes sharper. It gives the home cook more control over the sharpening process, and more knives can be sharpened like a chef’s knife, meat cleaver, paring knife, and even kitchen shears.

A popular type is called whetstones. This skill takes more time and practice, and yields extremely sharp edges. There are also various Manual sharpeners that are the most affordable, with little slits you run your knife through. Electric knife sharpeners are also an option, though manual ones do the trick just fine. 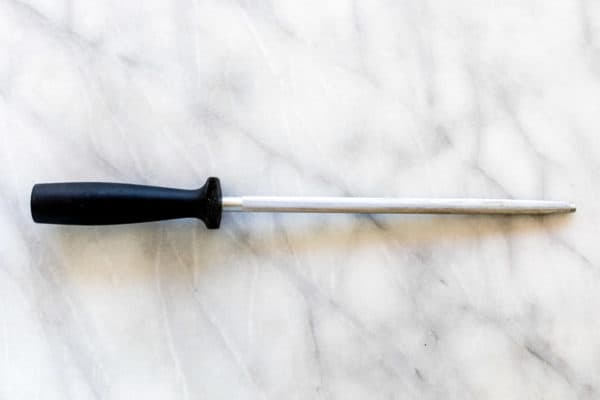 Honing steels are like long metal rod used to correct a blade’s edge before and after each use. It doesn’t technically sharpen or remove any metal; it essentially aligns and repositions where the edge of the knife is to make it more effective. Not to be confused with sharpening steel rods that do in fact sharpen your blade. 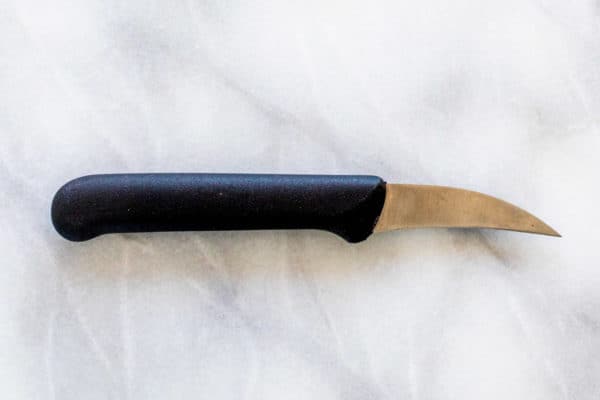 This type of pairing knife has a short blade that is curved, like a bird’s beak. The use might not be obvious at first, but the shape has advantages for round ingredients or creating round shapes. I first used one in culinary school to make small football-shaped potatoes that we would boil, then saute in hot fat to get the surface browned and crisp, it was quite fancy. Nowadays I use it to remove the peel from citrus for desserts or drinks. It’s also great for removing the skin from onions and ginger root. 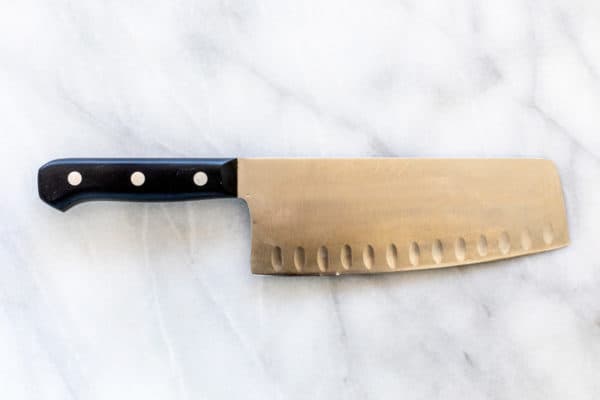 The large knife with a rectangular shaped blade has many functions. It’s primarily used to chop through bone. The flat side can be used to crush garlic to make it easier to remove its peel before mincing. However, both my grandfather’s used it like a chef’s knife to chop vegetables, slice meat for stir-fries, pretty much everything. They come in various sizes and weights, so you can purchase a size that feels comfortable to you. The big blade can be intimidating and a little dangerous if not used correctly. 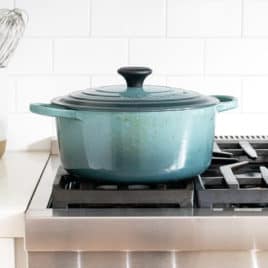 You Should Own a Dutch Oven 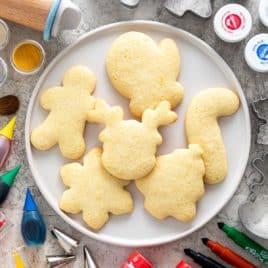 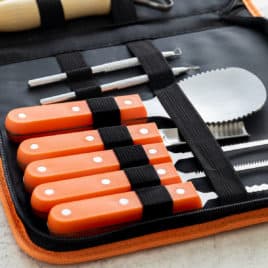